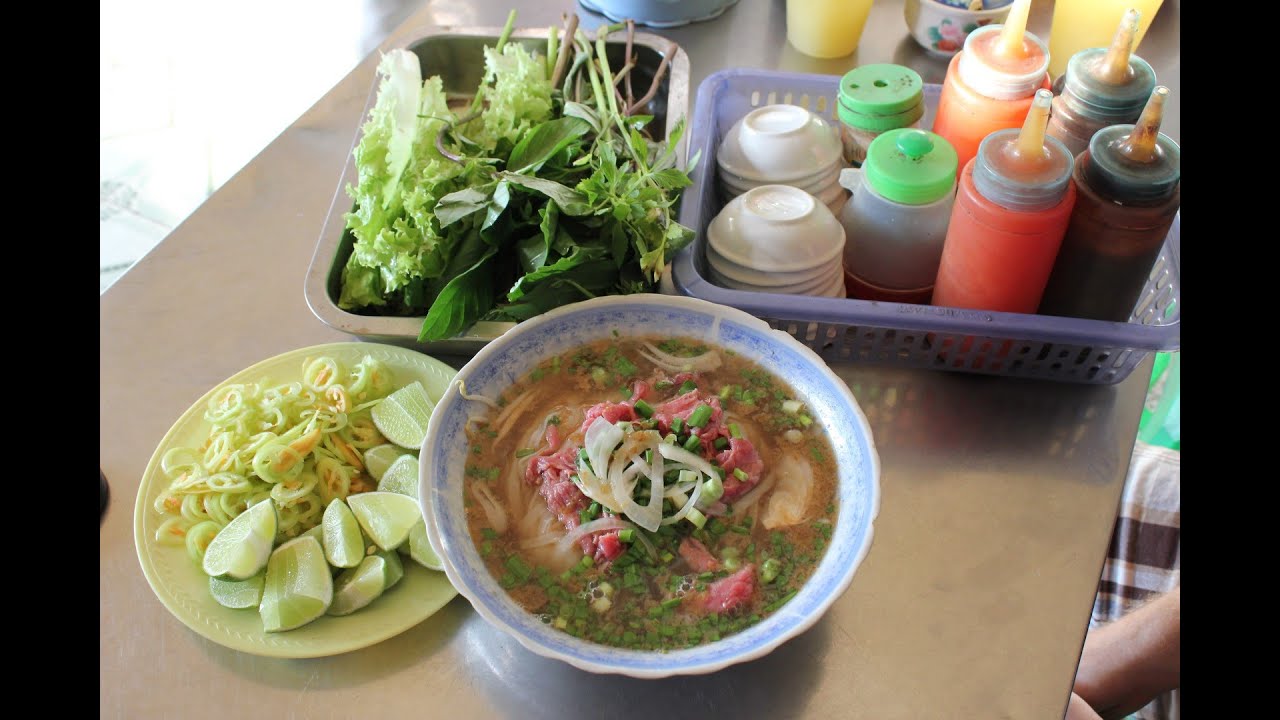 Chad and Fred catch up over a bowl of phở at Pho Le, 413 Nguyen Trai street in Saigon Vietnam learn more about Pho in Ho Chi Minh City here

Pho, the ambassador of Vietnamese street food across the entire globe. This one dish has helped spark an entire foodie movement of Vietnamese Street Food fans who come to Vietnam searching for a delicious bowl of Beef Noodle soup.

If you want to learn even more about Ho Chi Minh City Street Food be sure to check out our playlist here:

Simply put, a beef broth soup with flat rice noodles, braised beef, and fresh herbs. It’s a Vietnamese street food that can be found up and down the entire country of Vietnam and can differ greatly in style depending on where you are eating in Vietnam or even across the globe. The dish can be rather inexpensive around 30,000 VND or extremely pricey like 18 AUD in places like Sydney or some upscale restaurants in Vietnam.

Whats the difference? The amount of ingredients would be the simplest answer. For many many years Northern Vietnam, which is where Pho orginated, was one of the poorest areas in Vietnam. The classic bowl of Pho here, would have been very simple with the least amount of ingredients found inside the broth and the garnish inside of the soup. In southern vietnam, the addition of Thai Basil, Sawtooth Coriander, Mint, and Bean Sprouts is a common site at most any Pho restaurant but that is not the case in Northern Vietnam. The garnish would have been added into the broth and would simply be green onion and sliced white onion. This is a simplified version, there are a few other differences but I’ll leave that to a much longer blog post to dive into the history, origin, and differences of Pho across Vietnam.

If you say the phrase, “What the F*”, the beginning of the bad word would be the correct pronunciation. You don’t want to say it like the word, Foe. Remember, Pho is your friend, not your foe!

What does Pho mean in Vietnamese?

Pho will actually refer to the rice noodle used inside of the beef noodle soup. Its a flat, long rice noodle that will be fresh and not dried. In Vietnamese Cuisine, if you use that noodle for a different dish, you would then use the word “pho” to describe it and the Vietnamese would understand that you are talking about the noodle and not the beef soup.

What ingredients can you find inside of Pho Broth?

The classic style of cooking Pho broth is time consuming. It takes up to 8 hours to boil beef bones to get the flavored broth you will need for a great bowl of Pho. Burnt onion and ginger is used inside of the broth, along with other various spices that will depend on each cooks own recipe. If you want to experiment you can start with Cinnamon sticks, Black cardamom, fennel seeds, cloves, and coriander seeds. Don’t get caught up in being such a purist that it stops you from making your own pho, there are many recipes and videos out there showing how to make a much quicker pho that most Vietnamese households use. Most families are so busy that they aren’t going to spend 12 hours to make a bowl of Pho for family dinner. Don’t be worried and just jump in and have fun!